Not all of our rescues are cuddly little kittens that just need to grow a little and get spayed or neutered to be put up for adoption. In fact, that is really the minority. Even the cuddly little kittens usually need some sort of medical treatment, most commonly for an upper respiratory infection which is easily spread in animal shelters. Several times a month, we take in very ill or injured cats or kittens from various shelters and other situations. This is just a sampling of the special cases and happy endings your support made possible during 2012.

Holly, a tiny six-week old kitten, came in to Orange County Animal Care with a fractured hind leg. We took her to 17th Street Animal Hospital where she had to wait a week for her surgery while she recovered from an upper respiratory infection. The surgery, which was complicated due to her small size, was successful and, after two weeks recovery, she has been cleared to run and play with her foster siblings. She will be spayed next week and then be ready for adoption.

because he was scheduled to be euthanized after an improperly administered vaccination paralyzed him. Our vet began a series of treatments which brought about improvement within just a couple of days. Unfortunately, the medication he was getting to help him walk again also suppressed his immune system. The poor boy is back at the vet battling a severe upper respiratory infection and some digestive issues. He is not out of the woods yet but he is expected to pull through.

Cornflake and Alice were rescued from a situation of severe neglect. A private rescuer passed away and the people being paid to care for her kitties while she was in the hospital apparently weren’t. Cornflake was emaciated and Alice had to be hospitalized for a week. Alice was adopted within just a couple of weeks but Cornflake is still recovering.

Twisty was rescued from Orange County Animal Care. He had a bent front leg that

was either from an old injury or a birth defect. We took him for x-rays and a consult to see if anything could be done to help him. Turns out his little twisted foot is a birth defect and cannot be helped with surgery. He was hospitalized for a short time for an upper respiratory infection. After his recovery, he was made available for adoption and is still waiting for a special someone to open their heart to him and his unique little foot.

Orange County Animal Care Center contacted us about this very sweet kitty who had been turned in with a broken leg. Even though we did not really have the space for another broken kitty at the time, we could not let this little sweetheart be euthanized just because he had a broken leg. So over to Dr. Coghlan’s little Dakota went. He got a temporary cast on while he recovered from an upper respiratory infection. As soon as he was well enough, he had his surgery. After a few weeks of recuperation he was quickly adopted.

In February, we answered a call from Orange County Animal Care to rescue a kitty

that had potentially been hit by a car. Courage had a fractured jaw and possible head trauma. His jaw was wired and had to be adjusted during his recovery. Once healed, his jaw was good as new. Courage is available for adoption and has been waiting for a family of his own for quite some time.

euthanized because she had several fractured bones and her entire pelvis was twisted and shifted out of line from her spine, probably from being hit by a car. She had surgery and went to her foster home for bed rest. Her incision opened up a couple of times and she eventually was kept in the hospital for another couple of weeks to make sure the incision healed properly. After her return to her foster home, she continued to heal nicely, but Tomato’s story doesn’t end there. Against all odds, somehow this beautiful girl — who’s little body was mangled after being hit by a car and underwent x-rays and surgery to repair several fractures and twist her pelvis back into place — was pregnant the whole time and nobody knew or suspected it! Due to her injuries and continued recovery, she was not be able to give birth and had to have a c-section. The babies had to be bottle fed for a couple of days while Tomato stayed at the hospital to make sure she was strong enough to take care of them. Four healthy babies were born and they all now have forever homes as does Tomato who was renamed Athena.

Early this year, MeoowzResQ got involved in a hoarding case in Santa Ana. It was originally thought that there were about 40 cats at the home but it turned out to be

more like 75. Many were in dire need of medical attention including eye removal surgeries. The 17 most severe cases were pulled immediately then more were pulled as time and resources permitted. Many were feral and pregnant. Trapping and spaying/neutering went on for weeks. It was a horrific situation that took the efforts of many individuals. This case caught the attention of folks all over the world, literally, and many opened their hearts and pocketbooks to help!

Leroy fell out of a third story window right into the middle of the filming of a commercial in Los Angeles on Christmas Eve last year. His owner was going to have him euthanized because she couldn’t afford the surgeries he needed on his badly broken legs. A rescuer convinced her to relinquish him and asked MeoowzResQ to help. 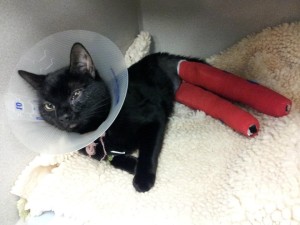 We immediately had him transferred to our vet who did a wonderful job repairing his severe breaks. It was uncertain if one of his legs would “take” or if it would need to be amputated. Weeks of recovery time were needed but the surgeries were successful! Despite the traumatic injury to his back legs and the fact that he has metal rods in them, he can still walk, run, and jump just fine. Leroy was with us for quite a long time so you can imagine that we were quite excited when, in September, he finally found is forever home with Kelly and Jake. His new mom, Kelly, also recently had leg surgery which required pins just like Leroy had!

All these kitties have a second chance at life thanks to generous folks like you who donated to their treatment and care. Your year-end, tax deductible donation will help us get a jump start on 2013 and allow us to say yes to more kitties like these.