One of our very own volunteers, Rocio Valdez, was nominated as one of ABC7’s Cool Kids! The weekly segment airs on Thursdays at 4:00pm and highlights some amazing kids and their talents, passions, or incredible stories.

Rocio, 17, loves cats and has three of her own. She was asked by MeoowzResQ to foster a few kittens until they were ready to be adopted. 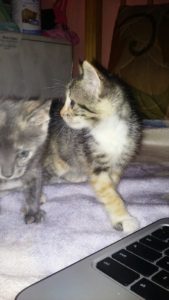 Rocio began fostering at the start of the summer by bottle feeding the kittens every three hours while still maintaining a tight summer schedule, which includes an internship and water polo practice.

“It was busy, but I thought it was really fun,” Rocio said.