Boy George is a perfect example of why we don’t test kittens for FeLV. He was rescued from the Riverside shelter and adopted out to a nice family last September at about three months of age. The family took him to the veterinarian who tested him for FeLV and his test came back positive. The nice family promptly returned him to his former foster. He was tested again a few weeks later, again with the Eliza test, again with a positive result.

Since we know kittens can often test positive with the Eliza test done at most veterinarian offices, we waited until he was six months old and had him tested with the IFA test, which came back negative. Although most FeLV positive cats can live a normal life for several years, most people would have had the kitten euthanized after the first test, let alone a second positive. There are special considerations to keeping an FeLV positive cat, but in this case, the kitten was not infected. Once we knew he was healthy, we began looking for a new home for him.

When she saw Boy George’s ad on craigslist, Deb B. called to find out about meeting him. Her son, who has cancer, wanted a cat. Arrangements were made for Deb and her son to meet Boy George at his foster’s home. They all immediately fell in love and we gifted Boy George to the family. So Boy George, the kitty who almost wasn’t, made a special wish come true. 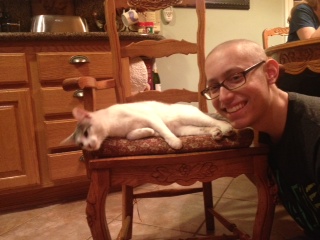